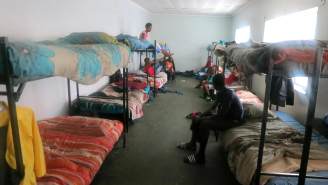 An Eastern Cape private boarding school situated in an old factory outside King William’s Town is being investigated by the provincial education department for shocking conditions.

Bencox English Medium private boarding school has allegedly been forcing pupils, some as young as five years old, to sleep in a cold, unventilated rooms.

The old factory quarters have broken windows with no curtains and storerooms that have been turned into rooms for the boarding pupils.

The school, situated between abandoned factories where criminals are known to hang out, is said to have no proper security.

Only one unarmed security guard is believed to look after the lives of more than 70 boarding pupils and school employees every night.

There are allegedly no electricity or alarms in the school, and in case of an emergency there are no proper emergency exits.

Of five fire extinguishers shown to the Daily Dispatch, only one seemed to be working as the rest were either broken or empty. It is understood the school rents the premises from the Eastern Cape Development Corporation (ECDC).

The Eastern Cape education department has confirmed it will send a team from the district to investigate the allegations.

The school’s director, Justice Mbadamana, conceded there were “challenges” but said the school “was working on fixing them”.

“Yes there are challenges but they are made by the Eastern Cape government, which has an agenda as they don’t want progress.

“I am adding value to the education of the province but they are not supporting me. How many other schools are getting subsidies? Why is mine not getting any support?

“If they want to, they [can] close the school, but they must not push me to challenge them,” said Mbadamana.

Education spokesman Loyiso Pulumani said the department was dismayed by the allegations.

“A team from the district will visit the school where a full inspection will be done to determine if the school is suitable to accommodate kids,” said Pulumani.